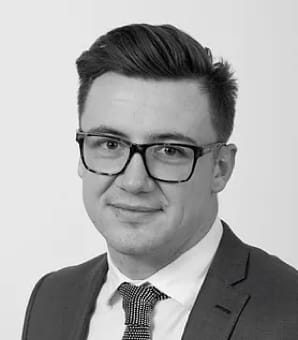 The son of lower-league football legend Peter Swan, of Leeds United and Hull City fame, George became one of football’s youngest agent’s after injury led to his own early retirement from playing.

He began his career as a shining star in the Elland Road youth system, where his impressive performances led to a big money move to Manchester City’s U14 squad.

A towering, ball-playing defender, George spent youth loans in Norway and then at Sheffield Wednesday.

However, a series of debilitating injuries hampered his development and he was released by City without making a first team appearance. After short stints with Wolves and then York City, he was forced to retire.

George was always academically bright and earned ten GCSEs during his time as a trainee at City. His recent experience of the Academy system makes him ideally placed to assist young players at the start of their careers.

“I’m grateful to Lee and Mark for giving me my chance at Sports Management International,” he says.

“They both make sure the job is done properly and in many ways it feels like I’m still around the dressing room, because we’re all ex-pros working together.

“It’s my aim to help build a better future for the young players we work with, as well as for myself.”